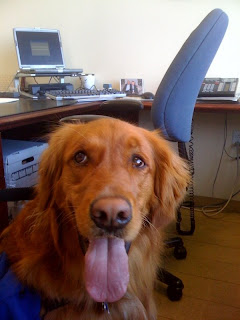 Well, I've been here with my dad, desperately trying to get his attention, but for the past couple of days, he has had his nose pressed against his monitor reading the online NY Times, when it hasn't been buried in the WSJ. He's kind of a news hound you know. He chews up the news the way I chew up tennis balls.

I'm still trying to understand what all the fuss is about with this G-20 Summit Meeting that was just wrapped up in London. Dogs have summit meetings too, but we just call them meet ups, and they're usually held in a park somewhere. Our summit meetings look much more fun than the one in London. I would have thought President Obama would have thrown a ball to Gordon Brown at least when they were outside 10 Downing Street. 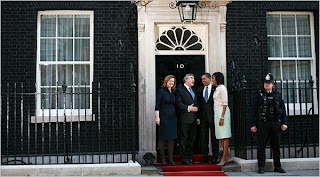 I can understand not playing ball in the house because I'm pretty sure there are lots of expensive things that could break if Mr. Brown went chasing after the ball.

Judging from the appearances of most of the attendees, the G-20 Summit was not a walk in the park, or a day at the beach, both of which I think should be tried the next time. Everyone looked pretty serious and somber, especially Nicolas Sarkozy and Angela Merkel. I'm pretty glad that President Obama didn't try to play catch with them because they both looked like they would turn on him and bite him on the hand. 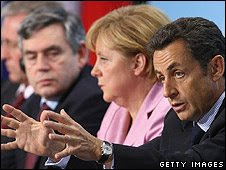 In fact, I swear I could see Mr. Sarkozy's lip go up on one occasion when they were talking about expanding financial regulations, and seeking to blame the United States for the global recession.

It seems to me like pointing blame at the U.S. for the recession right now is like blaming a fire for destroying a house. All the while, President Obama, while admitting the failures of the American financial and regulatory structures, has tried to muster every fire department in his command to put out the flames. Tom Friedman is right. We live in an interconnected world - what originates in the U.S. has repercussions in Europe and Asia - and vice versa. Erecting barriers and enforcing restrictions are not solutions, and in fact will only cause greater problems and prolong the current pain every nation is feeling. What is needed instead is improved coordination and better oversight. Free markets work best when the playing field is level, when there are clear rules for participation, as opposed to no rules at all, and strong punishment for those who would try to break the rules.

Clearly, we need to rethink and reset the way our financial markets work, but right now the most important response is to put out the damn fire before it causes more destruction. Once the fire is extinguished we can search for the bogey man, and beat him with sticks when he is caught. And then we can get to work on finding workable solutions to prevent a similar series of events from happening again. Personally, if they ever get around to finding the bogey man that caused this, I would like to take a big bite out of his derriere.
Posted by Harry

I try not to think too much about financial stuff. It hurts my head. Usually, what's on my mind is food, playing, sleeping, and getting attention. That, never gives me a headache!

We found you at Maggie & Mitch's place...thought we'd drop by and say "HEY"

You need to do an intervention for your Dad - maybe take him on a walk or play some ball with him....WAY to much politics - as long as our Mom's got pocket monies for treats - we're good....And you know we like the expensive kind of treat too...

Rethink and reset! Yes, good words, but.... Where'd Harry go?
Oh...probably ran out with the ball...
Cheers from Honey!