Dena says its a bad sign...I beg to differ! 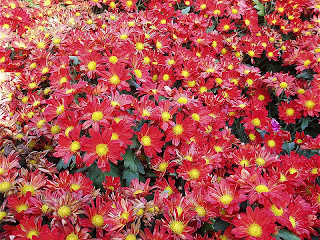 MUMS!!! MUMS!!! MUMS!!! I see them everywhere these days. As I walk in the neighborhood the porches and window boxes are filled with mums. I have heard that all the stores whether it be Home Depot or the grocery store mums are in abundance.

Dena said to Robert the other day, "Oh no this is a bad sign...I see mums." He laughed and asked, "Why is that bad?" She reminded him, "When you see mums in this neck of the woods... winter is right around the corner." Bad sign? So she says...she doesn't enjoy winter like I do, it fact she thinks it's dreadful and stupid.

Winter is the best! I can't wait to run in the snow, chew on ice, and walk in a windy snow storm. I love when the wind blows my ears back...it's quite refreshing to me. Maybe as time passes and we move to California I'll change my point of view but for now the MUMS are a sign of good things to come for me.
Posted by Harry No comments:

William is in Beantown 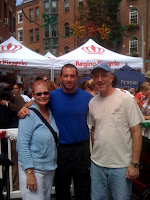 William came to visit last weekend. William is a dear friend of Robert and Dena's. They met when Dena worked at Macy's Herald Square in NYC. Dena and Robert say William will always be a part of their lives no matter where we live or what we do. Now that's friendship!!!

I love love love to have company and yes I do get a little excited. Actually I can hardly contain myself if the truth be told. I'm a Golden and I want to play. Mostly I love to play with balls. William is a fun guy; but isn't interested in touching my spit soaked balls, can't quite figure that out. My toys are my prized possessions, I wouldn't share them with just anyone. I tried really hard to lay my ball gently on his lap but he was really grossed out by it. Gram thought I was funny she always thinks everything I do is cute.

The other thing I tried to impress William with is my ability to jump up on beds. I love human beds and thought William would like me to keep him company at night. Robert caught me and told me to get down.( I saw him smiling though, he thinks I'm cute to) Seems I can't get things right. In the long run it was better for William because I do tend to crowd and snuggle during the night.

Saturday it rained really hard. Dena, Robert, William and Gram got cabin fever and decided to go to the Christmas Tree Store. The store has nothing really to do with Christmas, it's like Big Lots. A bunch of stuff no one really needs but they want it anywazzzz.

On Sunday Dena and Robert took William into Boston. They left me at home even though I tried to explain I would be a good doggie and try not to bark. They drove though Southie, Dorchester, Roxbury, Beacon Hill and finally parked at Dena's building in Boston. Then they walked over to the North End where they were having a fair. William treated us to Pizza Regina (our favorite), after which William had sausage and peppers, then canolli's from Mike's Pastry's . So many good things to eat in Boston. 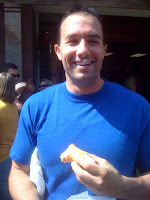 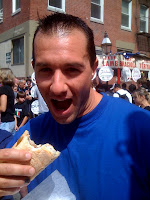 William took the Peter Pan bus home on Sunday. I was sad to see him go but I know he will be back again soon.
Posted by Harry 2 comments: