I know I have been very reticent these past few weeks, but I think it's mostly attributable to the "dog days of summer." That's a pretty good excuse if I say so myself. Besides coping with plain old procrastination and writer's block, I've actually been a pretty busy fellow.

Just before the 4th of July, Mom and Dad took me to my veterinarian, Dr. Wember, for my annual check up. As you can see from my picture, I can think of a lot of things more fun to do than visiting with your doctor. I can even take the needles and the blood tests, but the indignities of having your temperature taken are by far the worst. Dad said I was very brave this year, and he was proud of me. Happily, Dr. Wember gave me a clean bill of health and now I'm good for another year. I'm fortunate that I have a great vet, and better health care coverage than 47 million Americans. I'll save my bark on the health care debate for another posting, although you can probably guess that I'm siding with Paul Krugman on this subject. 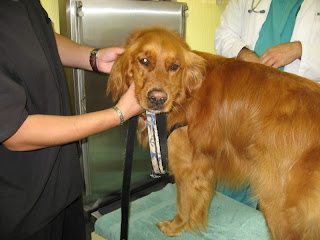 In between helping dad paint the doors in the house, and he still hasn't finished, I was visited by a turtle. Mom saw the turtle near our house and rescued him from the road, so he wouldn't get hit by a car. We later found out that he was a Red Eared Slider, so we gave him to a nearby shelter for someone to adopt. Apparently, Red Eared Sliders are domestic pets and shouldn't be let loose in the wild because they will destroy the natural habitat. Domestic or not, this turtle wasn't very friendly, and I certainly won't invite him back anytime soon. He didn't even say thank you when he left with Dad for the shelter. I thought that was very rude behavior. 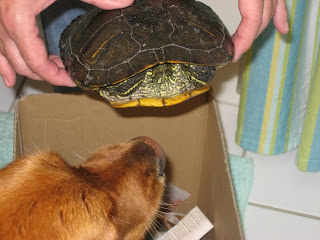 As if this weren't enough to keep me busy, I went on a three and a half hour car ride with Mom, Dad and Gram to upstate NY, and you won't believe this, but I actually visited my great granny. I didn't even know I had a great granny! She's 91 years old: that's pretty old, even in dog years. It was fun because I got to stay with my cousin Chata again and take a swim in the pond in front of her home. My mom thought it was quite funny, while Dad just sort of stood there apoplectic, knowing that he would have to dry me off for the ride back home. That's a picture of me during my time out after my swim in the pond. 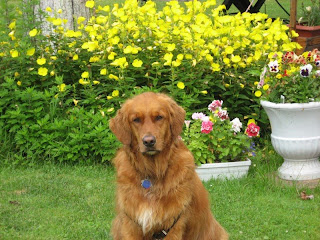 So you can see I haven't just been lying back this summer sipping drinks with little umbrellas in them. It's been a fairly busy few weeks for me so far, which brings me to perhaps the more important news of the day. I'm actually a little embarrassed to share this information, but I sort of have a girlfriend and we've been dating off and on. Her name is Roxie and she is a Leonberger. As you can see from these pictures, she is quite the head turner. She's a big-boned girl, since her lineage is a cross of St. Bernard, Great Pyrenees and Newfoundland. I think you humans would refer to her as a BBW (Big Beautiful Woman). 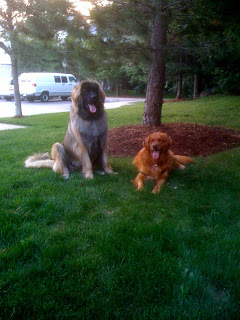 I think Roxie is more serious about the relationship than me, but we're having a good time together. I already told her that I'm not ready to settle down right now, but I'm willing to take my time and see what the future brings. I try to play it cool, but I really like it when she makes eyes at me. Sometimes we just spend the time laying in the grass, chewing on my tennis ball, and staring into each other's eyes. I never would have thought that a girl like Roxie would want to go out with a ball-obsessed Golden Retriever like me. The laws of attraction are just too complex for me to ponder. 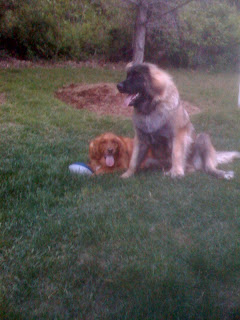 I think that just about covers my activities for the summer so far, and I will definitely make a conscious effort to post some more thoughts and comments before long. In the meantime, I'm going to try to get Dad to take me to the beach one of these days, and spend my midsummer nights dreaming of playing catch, chasing squirrels and just hanging out with my girlfriend, Roxie.

If you are interested in some fun on-line summer reading, check out Bo Obama's Op-Ed article in the NYT, and I've also been following the series in the NYT called the Puppy Diaries. It's a series about the trials and tribulations of training a Golden Retriever puppy written by a Times staff writer. Check out my picture on the reader's dog photos link while you're there too.
Posted by Harry

We're glad to see you back blogging again - we've missed you Harry!

Hi Harry. was checking who is new at DWB and thought I would stop by. Come see me sometime.
your pal, Morgan