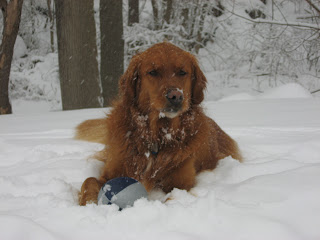 It's winter in New England, and the snow is falling again. This weekend there was another storm that passed through our area and dropped about 10 inches of snow, with some drifts about 18 inches deep. I love the snow, and I especially love to play football in the snow. One of the best things I enjoy doing, however, is making snow whiskers. I have the most fun sticking my face in the snow, while I'm looking for my football, and coming up with my whole face covered in the frosty white stuff, and looking like ol' dog winter.

My blogging friend Sierra Rose from Northern CA, loves to show off her snow whiskers, so I wanted to show her that I get to do the same thing here in Boston. I've never tasted snow from the high Sierra's, but I can tell you that New England snow tastes pretty good. It often has that nice briny taste from the moisture that gets pulled in from the North Atlantic. If Sierra Rose ever wants to try a taste of some New England snow, I would be happy to send her some in the mail, although I think it would probably melt by the time it got to her.

All this talk of snow, has me excited to go out and put on some more snow whiskers. I think I'm going to have my dad take me for a walk now. I'll send some more pictures later.
Posted by Harry

Harry!!!! We love your snow whiskers and post! You are getting much more snow out there than we are! Hope you are having lots of snow football games. Sounds like so much fun!
Happy New Year sweet friend!