My Cousin in NJ 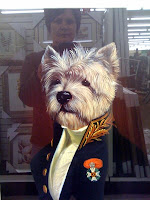 I have quite a few cousins but one of my favorite canine cousins lives in Middletown, NJ. She is quite the dog and as you see has royal blood coursing though her veins. Check out the picture we found, it has a striking resemblance to her don't you think? Chelsea is a West Highland Terrier. As you may know they are spunky, alert and full of energy. Chelsea has a lot to say, which is not unlike human women. I often hear her trying to get her two cents in when Robert and Dena are talking to Paul and Gladys. Paul usually says some really bad swear words to Chelsea, which I think makes her bark even more just to annoy him (Paul loves her more than he likes to let on)...Gladys on the other hand realizes she is doing her job (there are motorcycles, birds and bunnies she has to sound warning) and moves to another room to talk. I follow Dena and Robert where ever they go because usually there are some funny stories exchanged in these conversations. My humans and Chelsea's humans love each other and wish distance didn't separate them.

One thing I am looking forward to doing with Chelsea is taking a nice long walk in her neighborhood; then we can go to this place called Dogs on the Farm. 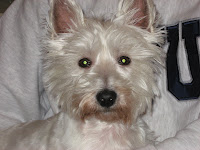 It would be fun to stay overnight, it'd be like summer camp for us. I understand they have all kinds of activities like digging, going into puddles, swimming and laying in the mud. Since it is a farm I can only hope they have some nice fresh horse poop to eat and some dried poop to roll around in. Robert thinks this activity is gross (sometimes I sneak some horse poo when we are walking in The Garden or The Common when he isn't looking). This is one of my all time favorite things to do. Chelsea and I won't tell Paul cause he will think it is the most disgusting thing ever.
Posted by Harry

She is quite a cutie. :D

You think horse poop is good, you should try goose poop! Oh yeah. Sounds like a fun trip regardless.

Its Monday Harry .. did you see the WSJ .. an article 'TIMES CO. threatened to close the Boston Globe within a month unless it gets $20 million in labor concessions.'

Heya harry,
How y'all doing. We thought we'd stop by. We'd love to talk a walk around Beacon Hill and hit the Public Garden and the Common. We read in our local fishwrapper that the authoritys have retreived the missing ducklings from Make Way for Ducklings. The Sox are sure off to a crappy start, fortunately the Evil Empire is too. Our dad grew up in a city adjoining Boston. Him and mom love going back up to visit. Lot's of people think that the grass is greener in the other fellow's yard.
- Homer J., Jubal, J.E.B., Sophie, Shelby Belle, Jack, Abby, Max, Shiloh, Alex, Boru and Jenny = The Bumpass Hounds
http://bumpasshounds.blogspot.com