I've been thinking about squirrels lately, and the misconceptions that many humans have about them. I would finally like to set the record straight - squirrels are not the cute little furry creatures you think they are. This perception is actually a well orchestrated public relations campaign that squirrels have been able to exploit because many in the main stream media lack the editorial courage and independence to investigate the rampant deception and corruption that is pervasive throughout the squirrel community.

Squirrels are in fact merely furry tailed insurgents who ingratiate themselves among humans in an attempt to foster divisions within the natural alliance between humans and canines. I know what you're probably thinking, "Harry don't you think you're taking this conspiracy theory a little too far?" And my answer is an emphatic, "No!" Let me give you a specific example. You probably all think it's so cute when you see me and my fellow dogs chase squirrels up trees, and invariably watch us barking at the smirking squirrel above our heads. I know that I speak for all dogs when I tell you we don't find this remotely funny. This is precisely what the squirrel is trying to accomplish - getting a cheap laugh out of our packies by making us dogs look foolish. Their actions continue to perpetuate the stereotype that we dogs are just like the cartoon character, Wyle E. Coyote, who hopelessly pursues the Road Runner despite his long history of incompetence and failure.

I'm here to tell you that I am not Wyle E. Coyote, and squirrels are arrogant, 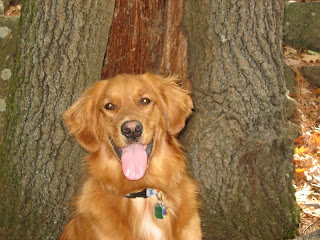 self-indulgent manipulators, who will do anything to advance their agenda of securing positions of authority and influence among humans. So I would like to remind you that the next time you see me, or one of my friends, chasing a squirrel up a tree don't think that this is some kind of playful game. Think of it instead as the blatant exposure of abusive behavior that it is.
Posted by Harry

Amen Harry, those rotten little bunnies are mean too.

Dang those rank furry-tailed creatures anyway for perpetrating so much mischief.

(NB Just found your blog via my good buddy, Honey - bless her, cause I love your blog and you are gorgeous, as your mom says! And sorry about FIRE in the hole - that must sound harsh - poor you!)