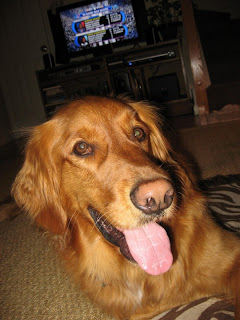 So here I am watching the NCAA basketball tournament with my dad. I'm much more a participant than an observer, so I would rather be playing football than watching sports on TV. B-O-R-I-N-G! But the loyal companion that I am, I just have to grin and bear it for a few evenings. I can do that.

I'm not very fond of watching guys bounce a ball up and down a court. Sometimes my dad bounces one of my tennis balls in front of me and it drives me crazy. I just want to grab the ball and not give it back. As I settled down on the rug to accept my fate, I actually started to get into the Villanova vs. American U game. The Villanova Wildcats were the heavy favorites in this one, but American at one point had a 14 point lead. I was getting excited thinking that a team of cats was going to get their tails handed to them by an underdog. Unfortunately, those sneaky cats found their mojo late in the game and beat American. That's okay though because my Huskies will show them what real dogs can do. They're going to be scrambling to find the closest trees.

I don't find all cats distasteful. I just find the vast majority of them to be aloof and condecending. 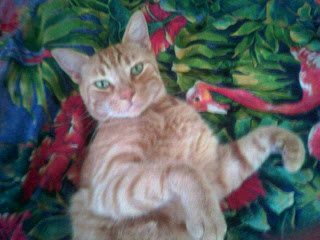 In some ways, they remind me a lot of the Adams family. They tense up and get all nervous when all I want to do is sniff them and say hello. I know that not all cats are that way because I am actually related to one. I have a cousin named Joe who lives in Southern CA. We've never really met, but we exchange the typical birthday and Christmas greetings, along with some email correspondence from time to time. Joe is your pretty typical laid back CA surfer dude type as you can tell from his picture.

I figured that after the Villanova game, dad would be ready for bed, but much to my chagrin there were more games to play. We ended up watching a team called Gonzaga. You can imagine my surprise because I thought Gonzaga was an Italian blue cheese. I've had it before because it's one of my packies favorite cheeses. It's actually quite delicious, which I suppose is why you have 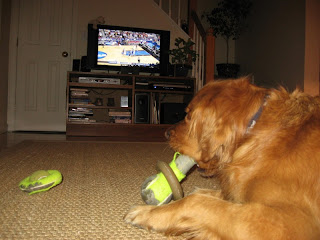 to go to school to learn how to make it. By that time, I had had my fill of basketfull for one night, so I decided to spend some quality time with one of my chew toys. There is only so much loyalty a dog can tolerate. Most people don't have a clue of the responsibilities that go along with being man's best friend.
Posted by Harry