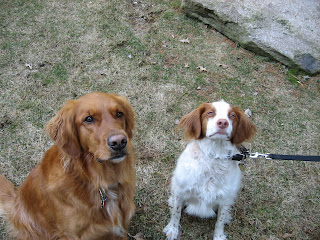 Allow me to introduce you to Rusty, my neighbor. He is a Brittany and quite talented. Sometimes I feel a tinge of jealousy when I see Rusty; I understand we all have inborn talents...I retrieve...no matter what you toss, I will go get it and bring it to you.... I may not give it to you but I will without fail bring it.

Rusty oh Rusty. He points! I have seen him do this on a number of occasions, humans react as if he was a parting the Red Sea. They say, "Look at Rusty..OMG look at how cute that is." I roll my eyes and think to myself no one cheers and laughs when I go get a ball it's expected of me. I AM HARRY the RETRIEVER! He is Rusty the Brittney, that's what he does.

The last time Rusty pulled this *act* was at MY house. So freakin' embarrassing. Dena gets all mushy and tells Rusty how smart and beautiful he is. Heavy sigh. He pointed...big deal he POINTED! I do have to admit when no one is around I have tried to point and it's like doing a Yoga pose, I got a cramp in my paw and limped around for days.

The other thing about Rusty that I have been dealing with is his hairdo. Granted we both have delicious red tresses but Rusty's coiffure is amazing. Again the humans think it's adoreable. Words really can't describe the power of Rusty's tuft of head hair. I've pulled Rusty aside and asked he confirms he uses, "No special shampoo, no sprays, gells or waxes." Just his natural Rusty-ness. Dena and Robert think it is sooo cute. After hearing about this for weeks I was feeling rather insecure about my appearance I walked into the bathroom while Dena was fixing her red tresses. 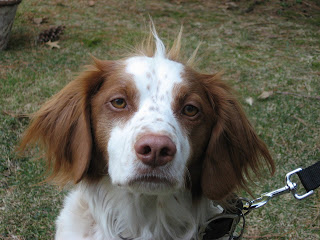 I mustered all of my energy on focusing on the hair wax...it worked! She reached down and said,"Let's see if we can make you look like your friend Rusty." She brightened up and looked at me saying, "Harry you are beautiful but your hair won't do what Rusty's does, I'm sorry sweetie." Another heavy sign. But she did say I was beautiful. I love her.

In conclusion: I'm jealous of Rusty but it is another issue I'm working on along with FIRE in the HOLE. My focus is going to be on my fabulous traits and being proud to have a friend and playmate like Rusty right next door.
Posted by Harry

You are one handsome boy, Harry and so is your friend Rusty! Welcome to DWB! We'll be back!

Love ya lots
Maggie and Mitch

Hi there Harry & Rusty! Nice to meet cha both & welcome to Dogs With Blogs! I think you are so handsome Harry. Maybe I can help teach you some neat tricks so that next time, the crowd will be more attracted to you than your friend eh what do ya say? Heehee!

It's Rusty ! You should know that I've waited a long time for a play mate, and I"m very happy your my new buddy. My Dad thinks you're always so happy and fun, and that you can play fetch really good ! You know, we're both pretty lucky to have parents who love us so much.

See you around the back yard -

Hi Harry!!!!!!!!! Great to see you here! Come visit our blogs, and start connecting with us!
Fabulous blogger you are, and you will have a ball participating in some of our fun, silly and really cool sites!
Cheers, Honey (13 yo golden)
www.supertrooperhoney.blogspot.com

Hi Harry,
As you will see in the post below, I found you through Honey and so glad she barked it out at us. Rusty might have an interesting coiffure, but according to your pictures, it looks like you've got gorgeous (strike that) - super handsome curls throughout your fur so there! Rusty's cute too (shhhh, he's BRED to do that pointy thing - look at his hair - it even points up)
xo Sammie

We think you are an intelligent dog with a good sense of humour!